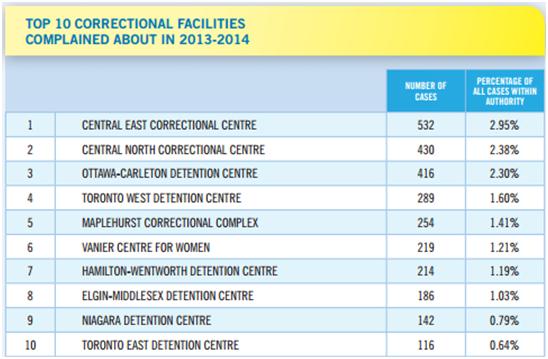 The Report also highlights a specific case of cruelty:

“In January 2013, an inmate at the Ottawa-Carleton detention Centre slipped and fell on a wet floor in an area where staff had neglected to put up a “wet floor” warning sign. The fall was the beginning of a painful ordeal that he asked the Ombudsman to investigate once he was out of jail and no longer feared reprisal. The fall broke the man’s femur bone. Despite his protests that he was in pain and could not walk, correctional staff lifted him up and walked him back to his cell. A nurse checked his leg and told him he only needed an ice pack. In a scene that was captured on the institution’s internal video cameras, more staff then carried him down a flight of stairs in a wheelchair, allowing it to bump hard against each stair. Correctional officers repeatedly told him to “shut up” when he complained about the pain.”