Prisoners’ Justice Day (PJD) emerged as a day of non-violent resistance to penal repression initiated by imprisoned people in commemoration of the death of Eddie Nalon who was left to die alone in the segregation unit of Millhaven maximum-security penitentiary on August 10th, 1974. PJD was first observed in 1975, and in 1976 imprisoned people at Millhaven issued a communication calling for one-day hunger strikes in opposition to the use of solitary confinement and in support of prisoners’ rights in memory of Eddie Nalon and Robert Landers, who also died alone in solitary confinement.

Since then, PJD has become an internationally-recognized day of solidarity and action, both inside and outside the prison walls, to commemorate unnatural deaths in custody and to demand justice for the human rights atrocities that states and their officials authorize and engage in. At the first PJD, people incarcerated at Millhaven produced a list of demands to reduce the harms they experienced behind bars. Many of these demands still remain unaddressed with the exception of prisoners’ right to vote federally, which was fought and won through a charter challenge led by Rick Sauve. If you want to learn more about the history of PJD see our pamphlet. PJD 2021 Info Pamphlet

PJD is observed each year inside and outside the prison walls with many events and direct actions planned throughout the world (e.g., memorial services, hunger strikes, labour strikes, vigils, talks, panels, social media campaigns, letters to political leaders, protests,nation-wide broadcast, etc.) to commemorate deaths in custody and to demand an end to the violence of criminalization and punishment. CPEP continues to be involved in organizing PJD events and solidarity actions on the unceded and unsurrendered territory of the Algonquin people (so-called Ottawa) to fight for liberation from the carceral state. On PJD incarcerated people, families, and the community peacefully advocate for prisoner justice, carceral abolition, human rights of prisoners, and listen to the experiences of those in prison and formerly incarcerated.

On social media, we encourage you to join the conversation by tweeting with different hashtags such as

Demands and statements from prisoners and formerly incarcerated people

Each year we receive statements from prisoners’ that are currently incarcerated, many of which are held captive at the Ottawa-Carleton Detention Centre. Here is what they have to say:

It is not enough to shed tears and ask for change – we must demand it. Support PJD by purchasing a t-shirt, attending an event, making speeches, sharing information on social media about the need for carceral abolition, donating to prisoner justice collectives, become a penpal, purchase and read a book on abolition, and demanding better from politicians.

Learn More about Alternatives to Policing and Imprisonment

The Mobile Crisis Team – Community Based

We all collectively get to come up with doing something better and more supportive.

“For those who have died

For our present state 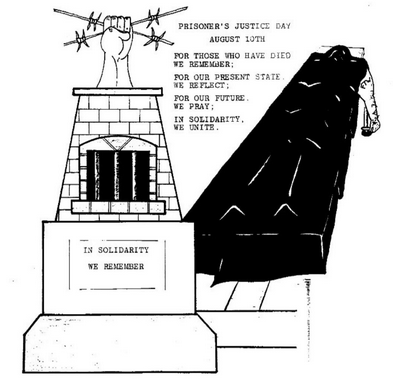 What does PJD mean to you? Share your stories, artwork, poems, or experiences with us.

Email us at pjdottawa@gmail.com to submit your stories, art, or experiences.

Getting involved with Prisoners’ Justice Day and Beyond

If you want to get further involved with prisoner justice organizing visit the link below for information on local events, collectives, and organizations to donate to and volunteer with. Getting Involved: Prisoners’ Justice Day & Beyond

Building the world we want: A roadmap to police free futures in Canada by Robyn Maynard

Journal of Prisoners on Prisons