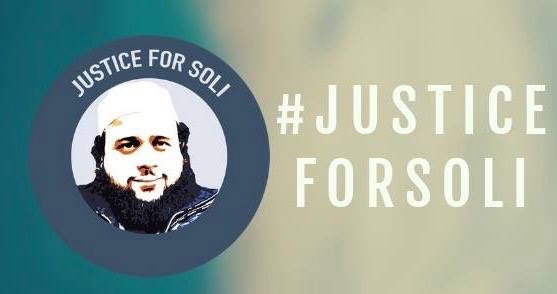 Join us on Monday 8 April and hear the tragic story of Soleiman Faqiri, through a short documentary screening and talk by his brother Yusuf. Free and open to the
public.

Soleiman was a 30 year old man with dreams to aspire to, goals to achieve, and a family that loved him. On December 15th of 2016, jail guards at the Central East Correctional Centre in Lindsay, Ontario, mercilessly took his soul. A man battling mental illness was refused medical care, placed in solitary confinement, then beaten to death. Join us at Room 482 in the MacOdrum Library Discovery Centre at Carleton University for a screening of a 20-minute documentary by CBC’s The Fifth Estate that exposed how brutally he was treated during his very short stay in jail, followed by a discussion with Soleiman’s brother Yusuf on the case and on the inhumane treatment of people with mental health issues in our jails. Soleiman was a man of such talent that he taught himself Arabic and the Qur’an, yet he was treated in a completely inhumane way behind the jail’s walls.

“They beat him to death. I don’t I don’t know how else to describe it. At all. There’s no other answer.”
– John Thibeault, former inmate who saw Soleiman’s murder.

Yusuf Faqiri – Soleiman Faqiri’s oldest brother and co-founder of the Justice for Soli Campaign, a movement demanding for transparency and accountability by calling for criminal charges to be laid against the guards who are responsible for Soleiman’s death