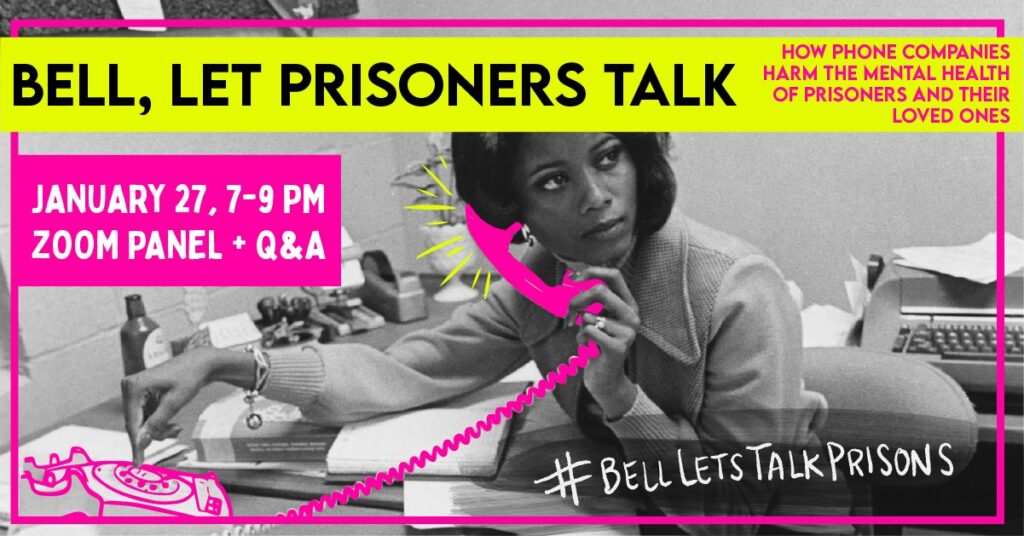 Join us on January 27th from 7 pm to 9 to talk about how the phone system affects prisoners’ mental health while companies like Bell profit from it. Despite Bell’s “Let’s Talk” mental health campaign, Bell makes big money from prisoners and their loved ones while making it tough for them to stay in touch.

It is only with community pressure that the Government of Ontario did not renew its lucrative contract with Bell Canada that only allowed prisoners in its provincial jails to reach landlines through expensive collect calls paid for by their loved ones. Thanks to the Criminalization and Punishment Education Project #BellLetsTalkOCDC and the Toronto Prisoners’ Rights Project #BellLetsTalkJails campaigns, Ontario’s prisoners are now able to make more affordable calls to loved ones’ cellphones and community service switchboards through the province’s new contract with Synergy. However, these calls – which often act as lifelines to break the anguish and pain of state confinement – need to be free. This is especially critical during the pandemic where prisoners are subject to prolonged lockdowns and segregation-like conditions, deprived of visits from family and friends, and face other draconian measures put in place in the name of preventing COVID-19.

In this panel, we take stock of the progress made in the last year and the many challenges which remain. Bringing together former prisoners, family members of prisoners, and lawyers currently engaged in a class-action lawsuit against Bell, we will discuss how the phone system has changed and what problems remain. We will also discuss longstanding harms caused by Bell’s predatory contract, and discuss what Bell’s continued monopoly over the federal prison phone system means for prisoners sentenced to more than two years. The panel will also include a call to action.

Imprisonment forcibly separates people who are incarcerated from their loved ones and resources in the community, which causes psychological trauma that undermines our collective well-being and safety. Costly phone calls are just one of the ways that human caging contributes to hardships that prisoners and their loved ones experience.

Meanwhile, Bell Canada is still profiting off of prisoners held in other jurisdictions. For instance, federal prisoners in Correctional Service Canada penitentiaries paid 8% of their wages towards the Bell operated telephone system (a fee has been temporarily suspended during the pandemic), in addition to the X per-minute costs of phone calls. This arrangement causes economic hardship and contributes to the mental distress experienced by people impacted by human caging at the federal level.

Who benefits from such flawed and expensive prison phone systems? Prison Industrial Complex / #PIC actors like Bell Canada and human caging authorities who receive kickbacks from them in exchange for having a monopoly for telephone service provision to prisoners.

OUR DEMANDS:
1) Depopulate prisons to the extent possible now to keep families together, while improving our collective well-being and safety by limiting the exposure of human beings to the violence of incarceration, COVID-19, and draconian prison pandemic measures.
2) Institute free calling for prisoners during and beyond the pandemic to foster community connections that are critical to fostering successful prisoner re-entry, preventing harm, and re-criminalization and re-incarceration in our communities.
3) To stop interfering with prisoner telecommunications and hindering their opportunities to communicate with their loved ones.

Souheil Benslimane, coordinator and co-founder of the Jail Accountability and Information Line and co-author of a report that calls Bell’s contract with with Ontario prisons “predatory”, sits down with Canada Land host Jesse Brown. LISTEN […]

This Mother’s Day LET US TALK!

This Mother’s Day take action to ensure that families can stay connected to their loved ones behind bars. Send a message to Sylvia Jones, Solicitor General, and Bell Canada using our simple e-mail tool: https://cp-ep.org/free-calls-for-prisoners/. […]