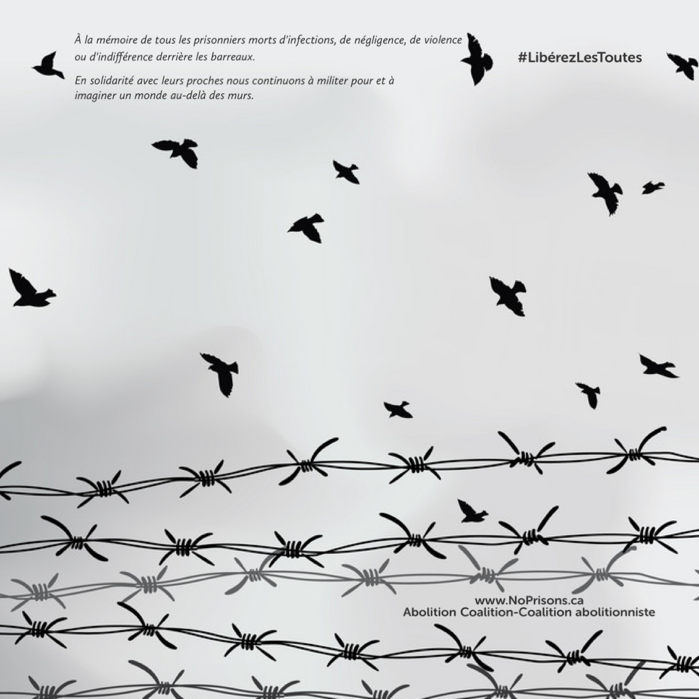 22 May 2020 – The Abolition Coalition would like to express our most sincere and heartfelt condolences to the loved ones of Robert Langevin, a 72-year-old human being who died of COVID-19 while held captive by the state at the Bordeaux prison in Montreal. This news saddens our members who’ve been calling on governments across the country to safely depopulate carceral institutions to the extent that’s possible to flatten the curve and avoid preventable deaths within and beyond sites of confinement since the beginning of this global pandemic.

Members of the Abolition Coalition are angered by the Ministère de la Sécurité Publique du Québec and the Bordeaux prison authorities’ inadequate response to COVID-19, which contributed to Mr. Langevin’s death. Reports of some Bordeaux prison staff refusing to wear personal protective equipment, while prisoners are being punished for allegedly not respecting public health measures, isn’t out of character for what passes as ‘normal’ in carceral institutions that control, injure, and kill human beings.

Mr. Langevin’s death comes while Bordeaux prison authorities are forcing prisoners to endure inhumane treatment. Many prisoners have been locked in their cells for 24-hour per day since 24 April 2020, even as solitary confinement has been described by UN Special Rapporteur Juan E. Méndez as “torture” and as scientific literature continues to demonstrate the lasting mental damage the draconian practice can inflict. Regular access to showers, phones, and other basic rights have been suspended. Responding to these human rights violations and the grave dangers to their health, prisoners undertook a hunger strike that lasted over one week to demand better living conditions, including masks and other materials that would allow them to protect themselves from contracting COVID-19. We send our solidarity to all the strikers and the captives who’ve been treated as disposable by governments.

So far, three prisoners have died from COVID-19 while under the custody of the Canadian carceral state that we know of. The Abolition Coalition urges all provinces, including Quebec, as well as the territories and federal government to take additional actions to decrease the use of imprisonment and limit prisoner exposure to death sentences in the form of incarceration. We demand that the safety and health of every human being be respected, regardless of their past. No authority or system should be able to forcefully cage human beings trying to survive a global pandemic in conditions where physical distancing, including from prisoners and prison guards, is impossible. To avoid future deaths in custody, we must ensure that criminalized persons are able to practice physical distancing. The only way we can do so is if we depopulate our prisons to the extent that’s possible while ensuring the needs of people left behind bars are met.

To ensure that Mr. Langevin did not die in vain, the Abolition Coalition commits to continuing the struggle against institutions and systems of criminalization and punishment.

May 14th – Prison is a Death Sentence: An Online Solidarity Action

UPDATED WITH VIDEO OF THE ACTIONS AND WEBINAR! Across the country, people of conscience have been rising in solidarity with prisoners to ensure that no one is left behind in our response to the spread […]

Webinar, May 25th, A De-Carceral City.

UPDATED WITH LINK TO THE VIDEO. This online webinar – “A De-carceral City: Redefining Safety, Building Community” – brings together local community organizers to reimagine what it means to be safe in Ottawa situated on […]

Instead of receiving care and compassion for his schizophrenia in the community, Cas Geddes was jailed at the Ottawa-Carleton Detention Centre (OCDC), where he was placed in solitary confinement. Shortly after, he became the third […]