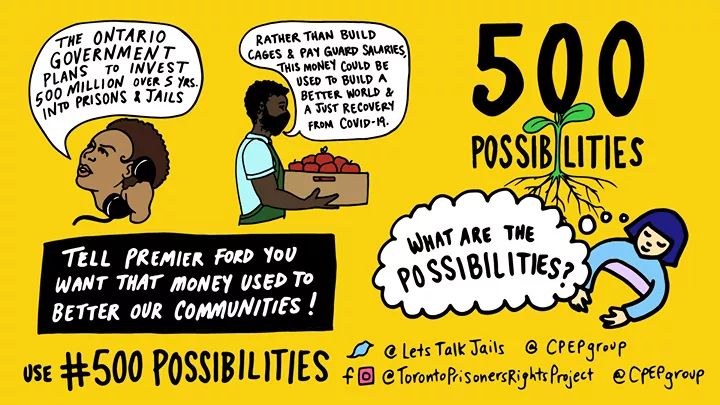 Last month, the Ontario Government announced that it will spend an additional $500 million over the next five years to hire more staff and build new infrastructure. This new investment into prisons and jails comes as our communities, municipalities and public services struggle to recover from COVID-19 and while communities are calling for the abolition of prisons and police.

How would you use this money differently? What would your community look like with this kind of support? Use #500possibilities to add your voice to the choir calling on the province to do better. Want us to share your suggestion on our social media? Use this form and we’ll make sure to shout you out if you’d like: https://forms.gle/G48PyKFMPuMYGgzb7

Read the press release below:

13 July 2020 – Last month, the Ontario Ministry of the Solicitor General announced that it will spend an additional $500 million over the next five years to hire more staff and build new infrastructure. The move to increase jail spending comes on the heels of a significant reduction of nearly 3,000 prisoners – a decrease of the provinces prison population of approximately 30 percent – since pandemic measures were put in place in March 2020, along with another scathing report on the Ministry’s treatment of prisoners by the Ontario Ombudsperson. Today, the Toronto Prisoners’ Rights Project (TPRP) and Criminalization and Punishment Education Project (CPEP) launched the #500possibilities social media campaign where people are being encouraged to share their ideas on how to keep each other safe with $500 million in investments in people and communities, rather than human caging – an unjust, inhumane, ineffective and costly approach.

The #500possibilities campaign is the latest in a series of efforts by community organizers in different parts of the world to defund police, imprisonment and other forms of state repression that most often target Black, Indigenous, and people of colour (BIPOC), the poor and precariously housed, people living with mental health issues, criminalized drug users, and others pushed to the margins. [add name] from CPEP explains the principles guiding the campaign: “We reject any further investments in state repression that props-up colonialism, capitalism, racism and white supremacy, patriarchy and heteronormativity, ableism, and other violent social structures. Like efforts to defund police budgets that have been gaining traction, including in Ontario, our call to defund jails is, at root, a demand for alternative responses to social problems beyond criminalization and incarceration”. TPRP member Jessica Evans adds: “Rather than spend $500 million to hire more staff, why not use that money to allow folks access to peer support and mental health services before they are involved in the system? Rather than invest that money to expand prison capacity, why not support community housing to end the revolving door between homelessness and jails in this province?”

Reflecting on the timing of the province’s decision to waste more money on imprisonment, Alannah Fricker from the TPRP notes: “The commitment to invest $500 million into prisons sends a clear message – that Ontario prefers to violently criminalize our communities than provide the support and services needed for people to live a safe, healthy and dignified life in the community. Much like the City of Toronto, who rejected a modest proposal to defund police by 10% late last month, Ontario is ignoring hundreds of thousands of people that have taken to the streets and advocated for alternatives to criminalization and punishment. In ignoring these voices, the province and the city are allowing systemic racism that polices and imprisons BIPOC people en masse to continue”.

Beginning today, the TPRP and CPEP are encouraging those living in Ontario to join its campaign to demand the province invest $500 million in our communities, not in cages. Using the hashtag #500possibilities, concerned community members are encouraged to tell Premier Ford and his team what they would like to see that money used to enhance their health, well-being and safety. Suggestions can be made via Twitter @letstalkjails and @CPEPgroup, as well as Facebook and Instagram @torontoprisonersrightsproject and @CPEPgroup. The campaign will also include a day of action on 7 August 2020.

Watch members of the Abolition Coaltion and some of Canada’s leading public intellectuals, artists, and organizers give teach ins and answer questions from the community concerning anti-black racism and police brutality/murder in so-called “Canada”. Watch […]

FINAL UPDATE: We are continuing the photo campaign and encouraging people to register to speak at the final Ottawa Police Services Board budgetary meeting on November 23rd. This is the last chance of this year […]