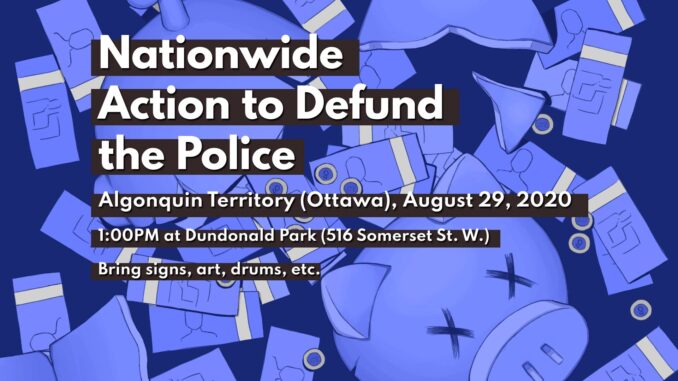 Updated with Video of the event! NATIONWIDE action to DEFUND THE POLICE, August 29th! Join us in solidarity for a day of protest across this part of Turtle island (so-called Canada) as a call to DEFUND the police across the land! In this event, the organizers echo the demands put forward by the Coalition for BIPOC Liberation.

On Algonquin Territory (Ottawa), we will gather at Dundonald Park (516 Somerset Street West) at 1:00PM, Saturday, August 29th for two community public panels. Speakers will discuss the racist, colonial and harmful practice of policing in the context of school resource officers (SROs or school cops), “wellness checks”, the importance of prison abolition, the criminalization of mental health, the inherent anti-Blackness of policing, etc.

The Herongate Tenant Coalition (HTC), Student Equity Strategy (SES), and the Criminalization and Punishment Education Project (CPEP) is calling on the community to RISE-UP and RESIST the oppressive systems which targets BIPOC communities, people who use drugs, poor people, people living with mental health illnesses, people who experience homelessness, migrants, 2SLGBTQQIA communities, and other oppressed people and groups of people.

Yours for the cause of justice and liberation,

Watch members of the Abolition Coaltion and some of Canada’s leading public intellectuals, artists, and organizers give teach ins and answer questions from the community concerning anti-black racism and police brutality/murder in so-called “Canada”. Watch […]

TRAINING EXTENDED TO DECEMBER 4TH! On December 9th, the Ottawa City Council will meet to consider and approve the 2021 Ottawa Police Services budget and it might be our last opportunity to convince them to […]