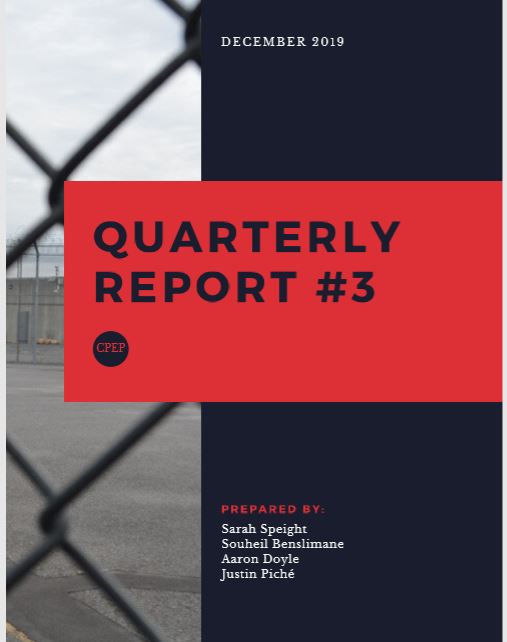 A year after its launch, the Jail Accountability & Information Line continues to work with prisoners to address human rights issues and re-entry barriers at the Innes Road jail, and releases its third quarterly report

10 December 2019 – Exactly one year ago, the Jail Accountability & Information Line (JAIL) began taking calls from people incarcerated at Ottawa-Carleton Detention Centre (OCDC) and their loved ones. The goals of the initiative were and remain to reduce the harms and use of imprisonment by working with callers to resolve human rights issues at the provincial jail on Innes Road and connecting them to services to promote safe community re-entry. Today, the JAIL hotline released its third quarterly report (click here to download) highlighting challenges faced by people forcibly confined at OCDC. During the third quarter of the JAIL hotline’s operations (10 June to 9 September 2019), volunteers took 935 calls.

Despite the efforts of those behind bars and the JAIL hotline to reform conditions of confinement at OCDC to the degree that is possible within a site of human caging, the volume of calls continues to increase each quarter (Q1 = 659 calls; Q2 = 796 calls; Q3 = 935 calls; Q4 = 1,012 calls). Aaron Doyle, Sociology Professor at Carleton University and co-founder of the Criminalization and Punishment Education Project (CPEP) which started the hotline, notes: “In the last year, we’ve taken 3,402 calls. Our reports reveal how the Government of Ontario often fails to provide the most basic necessities to prisoners. The Ontario Ministry of the Solicitor General still hasn’t addressed most of the issues we’ve raised in a meaningful way. Much could be improved at OCDC if they implemented our reasonable recommendations. The continued neglect by the province is disturbing, shameful and undermines community safety”.

Join us for an afternoon of fun for kids and families at Dominion Chalmers Centre, located on 355 Cooper St in Ottawa, from 1:30pm-4:00pm on November 16th 2019. The event is organized by students in […]