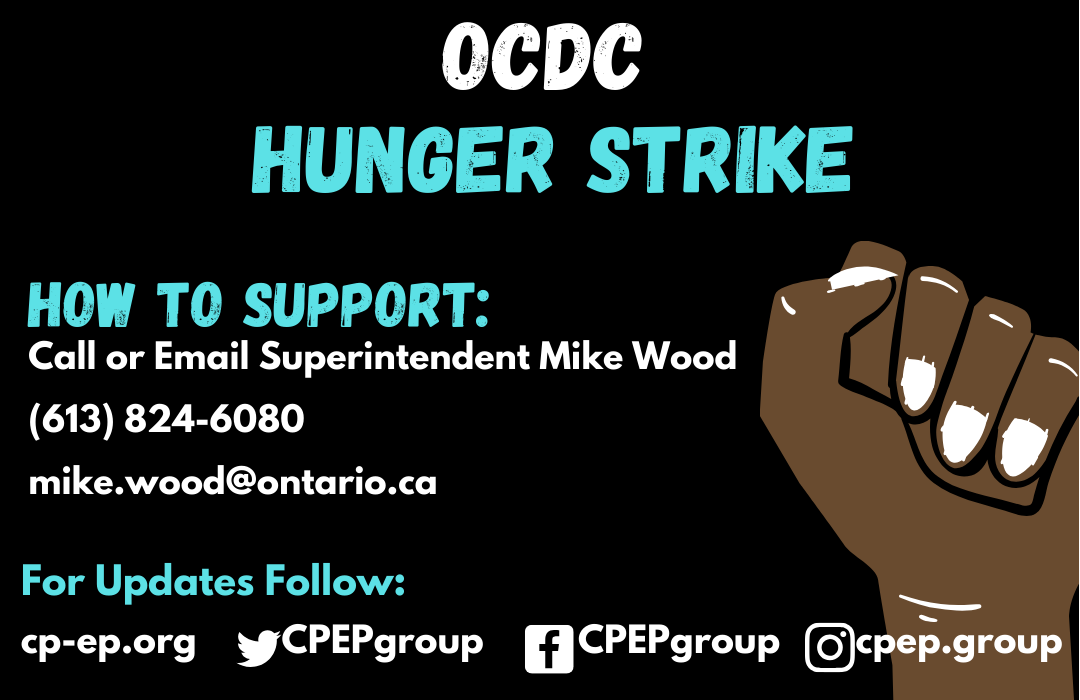 A hunger strike began on Wednesday, June 3, 2020 at 8am in the men’s maximum security unit of the Ottawa-Carleton Detention Centre. 14 men are participating and they have asked that we share the reasons for the strike and their calls for change.

Listen to the Statement from OCDC by Deepan Budlakoti. Mr. Budlakoti is 1 of 14 men currently imprisoned in the max unit at the Ottawa-Carleton Detention Centre (OCDC) who’ve been on an indefinite hunger strike since Wednesday June 3rd at 8:00am when they refused to eat one more meal that failed to meet their dietary and/or religious requirements.
watch here(begins at the 3:30 minute mark):

4 June 2020 (Ottawa / unceded and unsurrendered Algonquin Territory) – This morning at 10am, the Criminalization and Punishment Education Project (CPEP) will livestream a statement on their Facebook page by Deepan Budlakoti, 1 of 14 men currently imprisoned in the max unit at the Ottawa-Carleton Detention (OCDC) who’ve been on hunger strike since yesterday at 8:00am. Mr. Budlakoti explains the main issues driving the hunger strikers’ refusal to eat: “…we’re in the care of the ministry and we’re supposed to be treated with dignity, respect and professionalism, yet we’re not even provided for as humans. We’re looked at as animals. The basic necessity of life is food. How can you not provide someone with proper food. They [i.e. the staff and administration] go home, they eat their own meals and have the ability to choose. We’re supposed to be protected by the constitution, but we’re being treated as if we’re not human—as a number”.

This action is being supported by other prisoners at the Innes Road jail who also have demands, including access to PPE for everyone and more canteen items for diabetic people. The 14 hunger strikers – most of whom are racialized men that have experienced racism and other forms of discrimination throughout their lives – are engaging in this act of resistance for a number of reasons.

First, prisoners on the regular institutional diet report receiving meals made by Compass Group that are below the April 2019 standards outlined in the Canada Food Guide which are, at times, served frozen.

Prisoners on the Halal institutional diet contracted out to Sepha Foods report receiving less meat and lower quality food than other people held at OCDC. Moreover, they haven’t been served meat since the new trays began on May 25. The portions are inadequate, the food is processed, sides have been replaced with fillers like corn, and there’s no fresh vegetables or fruits, with little variety.

Prisoners on the Kosher institutional diet report getting less food, peanut butter shortages, and no dessert items. The issues faced by those on Halal and Kosher diets have forced some of them to choose between following their religious obligations or eating better, but still low quality food made by Compass Group, which is the same corporation that provides food services to educational institutions like the University of Ottawa under the Chartwells banner.

Beyond food matters, the hunger strikers are concerned about their lack of access to liquid antibacterial soap, hygiene products such as toothpaste, body wash and lotion, and canteen items like oatmeal and other healthier foods to supplement the privatized sub-standard meals provide to them by the institution, which are important to maintain their health, particularly in pandemic times.

The hunger strikers also report not having access to basic amenities to cope with the pains of imprisonment such as access to magazine subscriptions, adequate yard time, sufficient TV channels and TV time, and alternatives to cancelled visits with loved ones. Further, they’re unable to receive more than 6 pictures by mail at a time.

They’re also frustrated by the about the amount of time they can decide to spend in and out of cells, which limits their ability to physically isolate on a range where some cells are double-bunked despite the unit being under its official capacity of 24 set by the ministry.

While some of these issues may appear unimportant to some, the impact of these deprivations on top of the restrictions imposed by the Ontario Ministry of the Solicitor General during the pandemic are profound for hunger strikers at the Innes Road jail. They, like other human beings forcibly confined in other units at OCDC and other Ontario provincial jails and prisons, are experiencing profound insecurity associated with the heightened risk of contracting COVID-19 in congregate settings.

In the name of public health, those who haven’t been diverted or released from provincial custody have endured significant psychological and physical trauma while incarcerated as a result of losing access to visits from their loved ones and jail volunteers, frequent lockdowns associated with labour disputes and carried-out for the purposes of physical distancing, segregation placements taking place under the guise of medical isolation, and other draconian policies.

It’s in this context that the hunger strikers have made the following demands:
1) To alleviate food discrimination and the lack of protein currently provided by the Halal diet, those receiving Halal meals must be provided peanut butter and Cracker Barrel cheese everytime a meal is served.
2) People who receive the Kosher diet must be provided with their original four peanut butters daily, as well as their Kosher bread indefinitely to meet their nutritional needs.
3) TVs should be left on until 2:30am due to COVID-19.
4) More new TV channels must be considered as stated by the Deputy Minister’s office.
5) Lotion must be provided to all of us on a weekly basis in a 4 ounce container based on the sole fact that there’s no lotion available on canteen, which has been an on-going issue.
6) 4 ounce containers of body wash or liquid antibacterial hand soap must be provided per individual on the living unit weekly so we can try to keep our hands clean during this pandemic.
7) Apple variety rotation, orange variety rotation and additional fruits must be provided (e.g. pears, peaches, prunes, etc).
8) Vegetables must be provided on the side with meals (e.g. cucumbers, green peppers, carrots, broccoli, etc.). These items must be provided as per the ministry’s policy that says that the meals they serve to prisoners must exceed or match the 2019 Canada Food Guide specifications.
9) Magazine and book subscriptions implementation must happen ASAP as per ministry policy to facilitate our access to our reading materials at a fair cost and to help preserve our sanity.
10) Increase access to outdoor activities and yard.
11) Provide haircuts or the tools necessary to cut hair as per ministry policy.
12) Provide alternatives to visits such as video conference calls, but only as an interim measure as in-person visitations need to be reinstated as soon as Ontario enters the second stage of reopening during the pandemic.
13) Allow us more access to our cells during dayroom activities to allow us to physically isolate when needed.
14) Increase the 6 pictures per envelope limit.
15) Stop displaying items on the canteen list that are out of stock.
16) Increase the number of healthy items on the commissary such as oatmeal.
17) Decrease or eliminate processed food from our diets.

In response to the hunger strike that’s begun at OCDC, Ottawa-Centre MPP Joel Harden states: “…people are making reasonable demands. Many haven’t had their day in court after months or even years, and COVID-19 has made things even worse. Everyone in Ontario deserves safety, dignity and respect”.

Souheil Benslimane, Lead Coordinator of the Jail Accountability & Information Line (JAIL) which has been taking calls from people held at OCDC since December 2018 and works with them to address the human rights issues and community re-entry barriers they routinely face, adds: “We’re keeping people behind bars and subjecting them to barbaric conditions of confinement in the midst of a pandemic that has the potential to significantly alter or end their lives under the misguided assumption that keeping them locked-up makes our communities safer. How does cutting people off from their families and treating them in such dehumanizing ways contribute to this goal? We need to stop hurting each other and defund state institutions that continually fail to live-up to their stated objectives like police and prisons. How is it that their systemic failures always lead to bigger budgets, bigger infrastructure, and more resources as if that’s ever solved anything? We need to work towards ending human caging and retributive practices now. We need to also build capacity to respond to social harm in transformative ways that bring those directly impacted together where it’s their desire to do so in order to be heard, to identify and meet their respective needs, to promote accountability, and to put into motion plans to dismantle dominant social structures that give rise to violence to actually produce the societal conditions required for our collective well-being and safety”.

In the midst of the hunger strike and the on-going pandemic, members of the Criminalization and Punishment Education Project and their allies like the Toronto Prisoners’ Rights Project remain committed to working with criminalized people to reduce the use and harms of imprisonment until such time that sites of human caging are widely seen as obsolete. This requires building-up people and communities, while tearing down walls to ensure safety for all.

At this time, such work also requires encouraging people to stand in solidarity with prisoners at the Innes Road jail by calling OCDC’s Acting Superintendent Mike Wood at 613-824-6080 or emailing him at mike.wood@ontario.ca to ensure the reasonable demands of the hunger strikers are met.

The Criminalization and Punishment Education Project, with the support of the Ontario Human Rights Commission and backed by 60 civil society organizations, is calling upon the Ottawa Carleton Detention Centre and the Ontario Ministry of […]

Free Them All – National Day of Action Ottawa

Updated With Video of the Entire Event! WE ARE TAKING TO THE STREETS TO DEMAND ACTION! March 20 marks one year since the first prisoner in Canada contracted COVID-19 at the Toronto South Detention Centre. […]