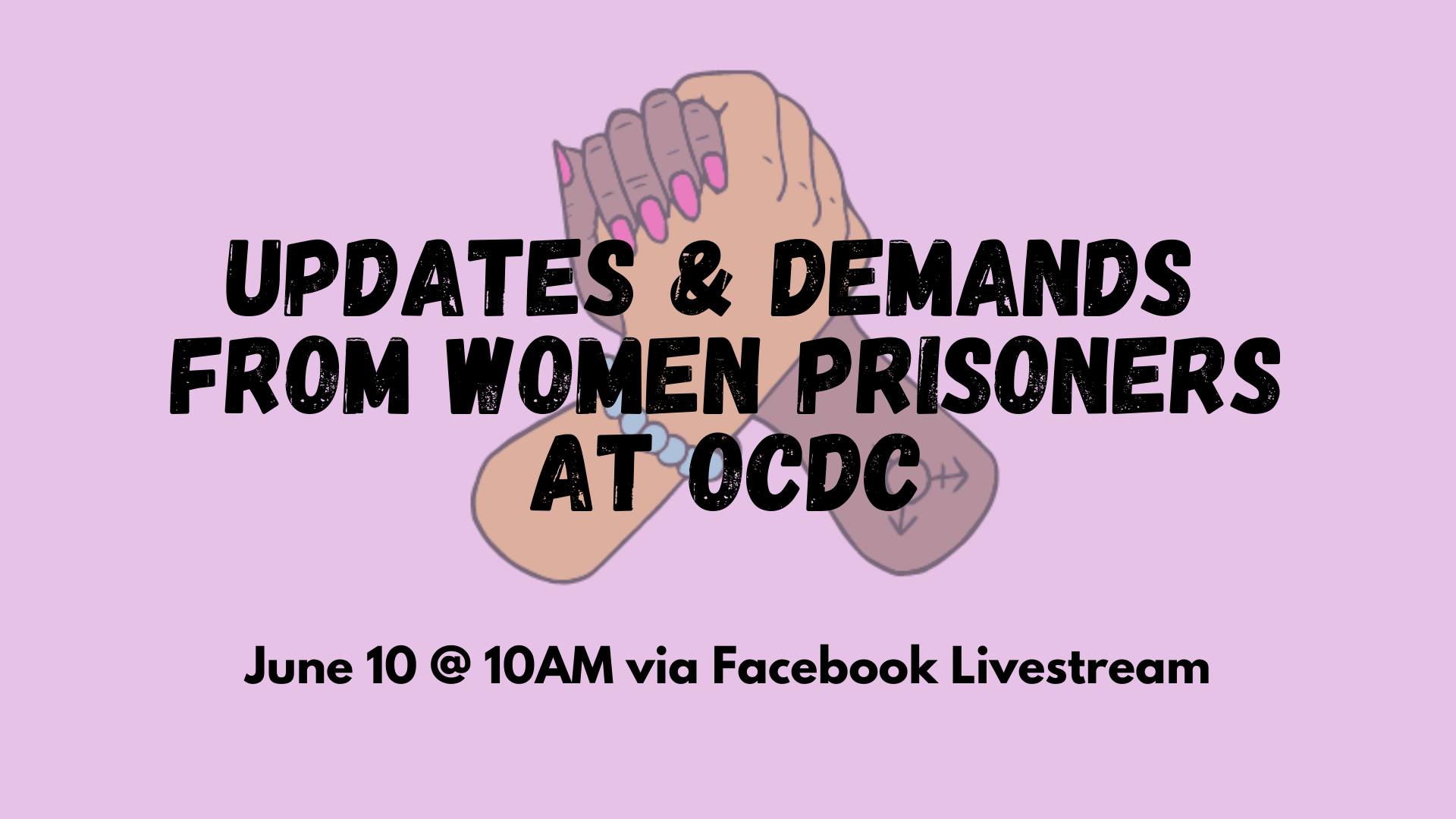 Last week women incarcerated at OCDC made statements in solidarity with the hunger strikers in the maximum security ward. This week, it’s time to hear from women at OCDC and listen to their demands! Tune in at 10AM, tomorrow, June 10th for updates from the inside!

Among the issues that will be raised during today’s event is that despite being obligated by law to accommodate the creed-related needs of prisoners, OCDC’s administration refuses to allow incarcerated Indigenous women access to cultural and spiritual activities. Brittany, a women confined at the Ottawa jail, explains: “We’d like to see smudging ceremonies brought back because we have a right to our religious beliefs and practices, and the ministry isn’t following through with that at all”.

Today’s action follows a hunger strike undertaken by 14 men at OCDC. Women at the Innes Road jail supported all hunger strikers’ demands and are calling for additional changes, including access to programming that reflects their intersecting identities, appropriate medical and mental health services, and an improved canteen list. Incarcerated women have also reported that the jail does not accommodate the needs of vegetarian people to the point of undue hardship by routinely forcing them to eat a vegan diet. Furthermore, OCDC often denies incarcerated women who want to stop using drugs access to appropriate drug substitution treatment and further stigmatizes them, which pushes people further to the margins and prevents them from caring for themselves. The conditioner and other personal care products provided by the institution are substandard and overpriced. The jail suspended the sale of makeup on the commissary. Sarah Speight explains the significance of their demands: “While some of these issues may appear unimportant, the impact of these deprivations weighs heavily on the women who are trying to cope with the trauma and state-sanctioned violence associated with the harmful practice of human caging”.

Watch the coverage from APTN: https://www.aptnnews.ca/videos/indigenous-inmates-coming-forward-with-demands-at-the-ottawa-carleton-detention-centre/

A hunger strike began on Wednesday, June 3, 2020 at 8am in the men’s maximum security unit of the Ottawa-Carleton Detention Centre. 14 men are participating and they have asked that we share the reasons […]

People imprisoned at Joyceville Institution issue statement seeking access to information about CSC’s outbreak plan and supplies to get through the crisis. 19 December 2020 – Since the lockdown began, there’s been no information coming […]