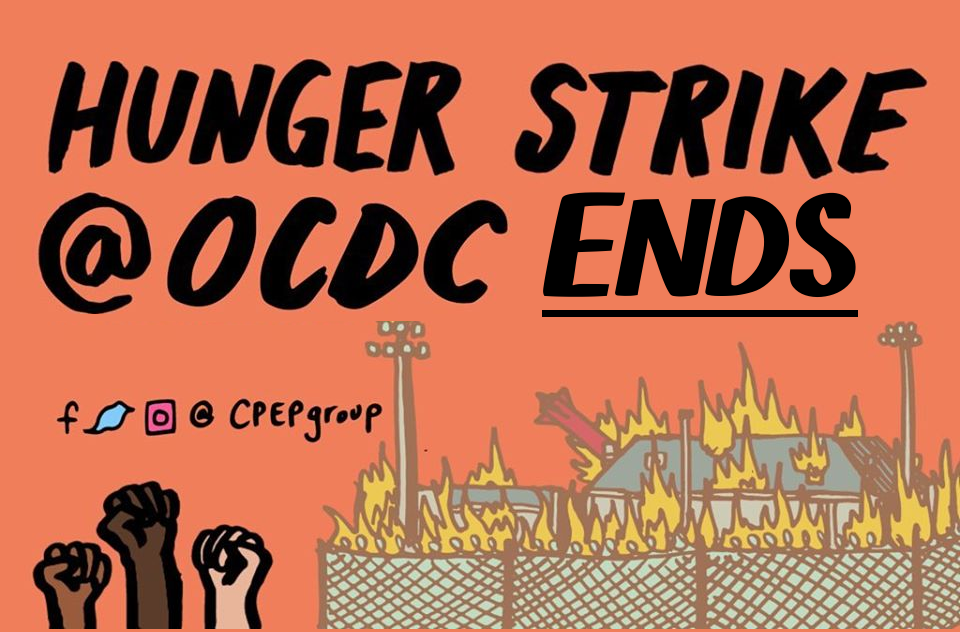 After a 5 day hunger strike, the OCDC(Ottawa’s jail)has issued no response to the hunger strikers and the citizens who support them and their call for basic necessities like soap, sanitizer, and edible food. Instead they subjected all hunger strikers to 24-hour lockdown during the 5-day action that ended at noon on July 26th, while threatening others with segregation. This comes after the OCDC failed to meet the demands of the previous hunger strike almost two months earlier, after they agreed to the strikers demands.

There are currently hunger and labour strikes going on in prisons all over Canada in response to the poor conditions in jails and the treatment of prisoners during the COVID-19 pandemic.

You can read and download CPEP’s official press release below.
In a call for recognition and justice, people imprisoned at the Ottawa-Carleton Detention Centre (OCDC) organized and initiated a hunger strike the morning of July 22nd to protest oppressive conditions at the jail and in the wider community. They called upon the jail and the Ontario Ministry of the Solicitor General (MSG) to meet their basic demands such as adequate access to soap, conditioner, edible and nutritious food, along with increased access to reading material. Dozens of prisoners abstained from eating and some stopped taking their prescribed medications to protest the disenfranchisement and violence they face at Ottawa’s provincial site of human caging and in society at large. This hunger strike took a severe toll on the health of many OCDC prisoners who participated in the action, especially those with pre-existing health conditions, who saw their health degrade more rapidly.
When the latest hunger strike began at the Ottawa jail, the Ministry claimed it has procedures in place for when prisoners refuse meals. The hunger strikers confirm that the procedures they have in place amount to torture and punishment. The OCDC responded to prisoners expressing their constitutional rights by subjecting all hunger strikers to 24-hour lockdown during the 5-day action that ended at noon on July 26th, while threatening others with segregation. Both practices have been denounced by judges in Canadian courts. The use of authoritarian tools to stifle the protest and uphold the oppressive status quo is reprehensible, particularly when much of what was demanded by the hunger strikers could easily be resolved through bargaining in good faith, rather than repression.
During the recent hunger strike, it again became evident how imprisonment upholds oppressive structures through the colonial, racist and patriarchal violence it levels against incarcerated women for merely claiming their most basic rights. In response to the participation of a number of women in the hunger strike, OCDC increased an Indigenous woman’s security classification and threatened to withhold live saving prescription medications such as methadone from others while allies gathered to show solidarity outside of the jail on June 24th. Denying the existence of systemic racisms within its walls, making degrading and humiliating threats to prisoners, and engaging in censorship by blocking local and national news networks and newspapers from the institution were some of the other forms of retribution faced by the hunger strikers.
Aside from the letter written by Ottawa-Centre MPP Joel Harden and Official Opposition Critic for the MSG Kevin Yarde to Solicitor General Sylvia Jones urging her to meet the strikers’ demands, more than 180 people sent emails to the Minister and several other called her, but to no avail. The jail, the Ministry and the Government of Ontario is ignoring the strikers’ plea for less harmful jail conditions. They, along with policing authorities, are also ignoring calls for broader systemic change challenging the root causes of their imprisonment, including the demands made by Roxanne Draper who seeks an end to policing and imprisonment – two systems that collaborate to target people who are poor and who are experiencing homelessness, along with other issues that require investments in people and communities to end inequality, not cuffs and cages that sustain it.
Despite the hunger strike ending, prisoners and their allies on the outside are committed to pursuing all necessary avenues to centre the plights and experiences of prisoners in the struggle against colonial, racist, patriarchal, and punitive injustice. As this strike demonstrates, we cannot improve human cages – we must work together to dismantle them and build approaches that keep us safe from all forms of violence. Reallocating funds from OCDC, where it costs $85,000 per year just to imprison one person, to housing, income support and employment, peer support, compassionate mental health care, harm reduction, and transformative justice are just some of the ways we can enhance our collective well-being and safety without caging people.

Remembering David A Father Who Died at OCDC

David was a father of two from Cornwall who was optimistic about the future. His communities on both sides of the prison walls are deeply troubled by his passing. When our callers informed us of […]