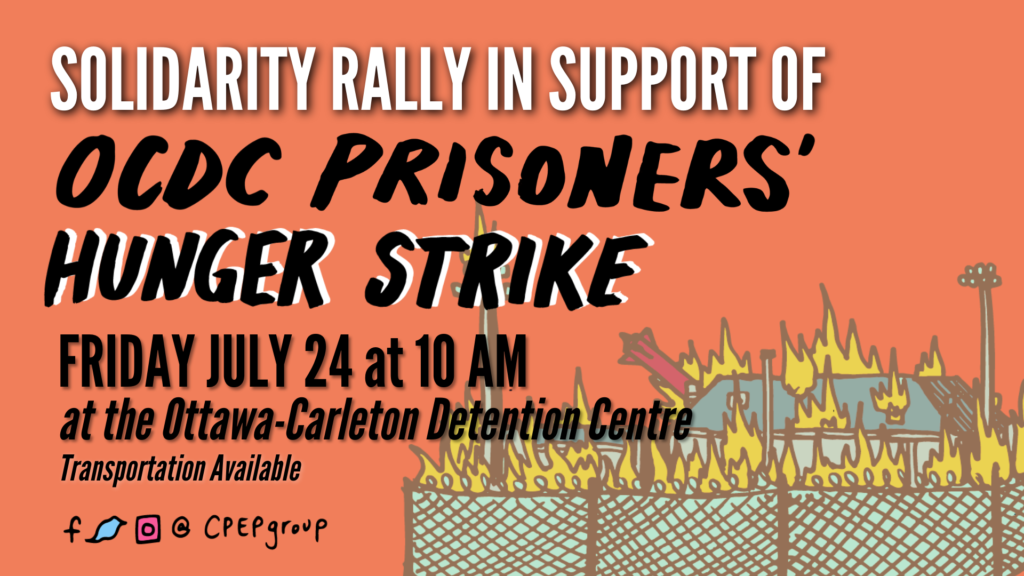 On July 22nd, over 70 people incarcerated at the Ottawa-Carleton Detention Centre (OCDC) began a hunger strike demanding immediate changes to jail conditions. This action follows a 31-hour hunger strike initiated on June 3rd during which OCDC prisoners demanded healthier food, hygiene products, and increased access to reading materials and television. The strike ended on June 4th following “successful” negotiations between strikers and the jail administration, who committed to meeting the striker’s demands. More than a month and a half later, OCDC has failed to follow through on meeting their obligations under the agreement they made with the hunger strikes.

In response, people incarcerated at OCDC have reinstated their hunger strike on both the men’s and womxn’s sides of the jail, and issued a new set of demands. This morning at 10:00am, the Criminalization and Punishment Education Project (CPEP) livestreamed statements from people incarcerated at the Ottawa jail on Facebook and Twitter. In these statements, confined persons outline longstanding issues leading up to this strike including issues with the food system, inadequate cultural supports, poor medical services, and systemic discrimination based on gender, race, mental and physical ability, and other determinants of identity. They also share their collective demands for change and additional demands highlighting issues impacting incarcerated women, Indigenous, Black, and other people of colour behind bars, and those made vulnerable by the Ontario Ministry of the Solicitor General (MSG) in the context of a global pandemic. Their demands can be read here and will be published on our website following today’s event.

Use our Email-Zap Tool to tell Solicitor General Sylvia Jones and Acting Superintendent Wood that they must meet the demands of the hunger strikers: Click Here.

A full list of demands can be found here:

info-graphics and hashtags for sharing on social media can be found here:
#OCDCHungerStrike #BlackPrisonersLivesMatter #RespectIndigenousPrisoners

Listen in it to Brittany Legue, who's incarcerated at the Ottawa-Carleton Detention Centre (OCDC), explain the Ministry's inability to meet the demands of prisoners, especially womxn.

OCDC's violence is gendered and patriarchal

Letter from Burnside prison in support of the OCDC hunger strikers

“[since the protest,] conditions did not change in Burnside, and in fact they got worse. […]

Still, we do not regret standing up together for our rights.”#OCDCHungerStrike
https://t.co/lBU3xkjtDf

Prison Strikers taking part in the #OCDCHungerStrike have been fasting for 4 days.

Yesterday, we held a rally in front of the jail to show them support.

As a consequence of the strike, the prison is further punishing prisoners. https://t.co/BhN2g64c93

Use our email tool- link in bio https://t.co/r5kUtDuLUI

Use our email tool- link in bio https://t.co/r5kUtDuLUI

Another hunger strike- demands below- we need to bring people back into their communities and #FreeThemAll https://t.co/sPbIktCX4k

Please listen and learn at the least. 💙Rally on Friday @CPEPgroup https://t.co/srPA88Qmoq

Honks from truckers and waste collectors along Innes in front of OCDC in support of hunger strikers on the inside. Workers, tenants and prisoners, all connected through shared exploitation by the ruling class. @CPEPgroup pic.twitter.com/0I1PsPwi5F

We rally at the Innes Rd. prison in solidarity for the incarcerated in the capital & their ongoing hunger strikes. Check @CPEPgroup for their demands of their futures. pic.twitter.com/9W22HSvVA1

We urge you to meet ALL the demands on the strikers @SylviaJonesMPP – they were already agreed to…make sure the commitment is real! https://t.co/2zA71fyRci

After a 5 day hunger strike, the OCDC(Ottawa’s jail)has issued no response to the hunger strikers and the citizens who support them and their call for basic necessities like soap, sanitizer, and edible food. Instead […]