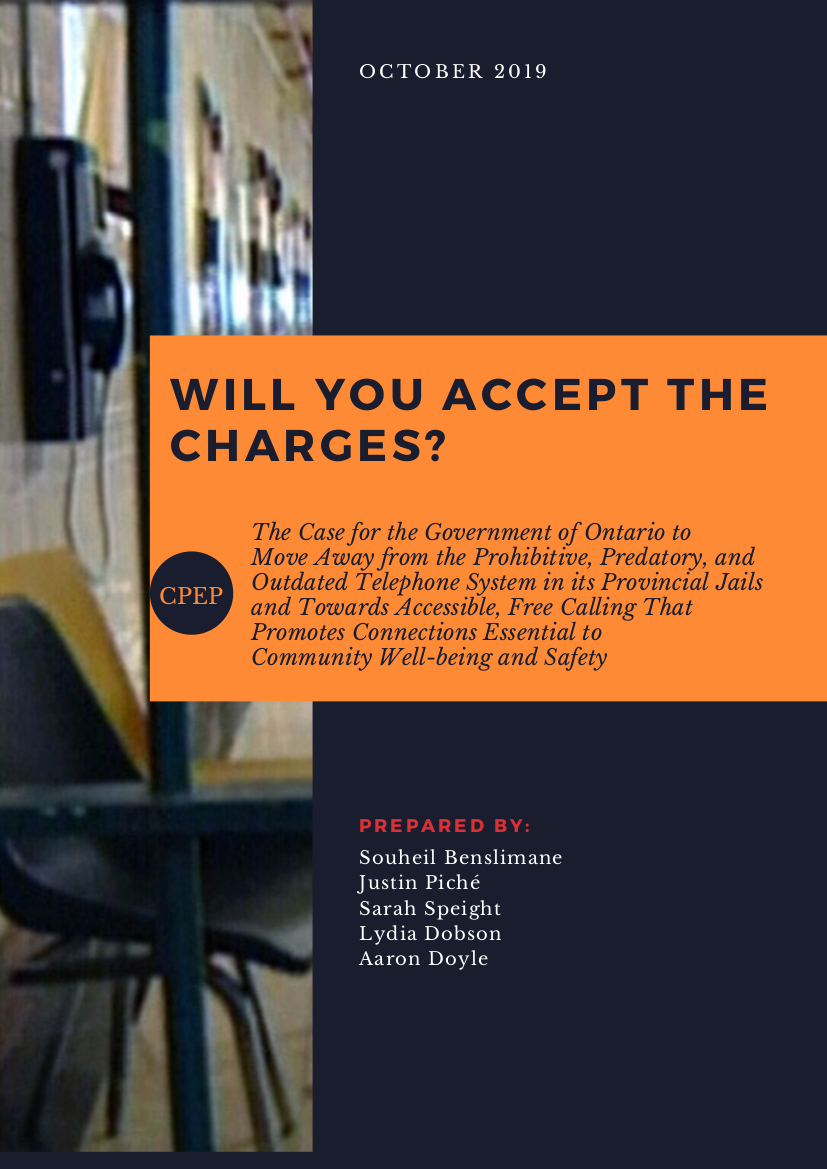 Today the Jail Accountablility & Infomation Line (JAIL) has released a new report which documents the problems with the Bell Canada administered provincial prison phone system that does not allow calls to cellphones and serves as a source of hardship for prisoners’ families who have to pay the exorbitant costs of collect calls, which often amount to hundreds of dollars per month and sometimes even thousands. With Bell Canada’s contract with the Ontario Ministry of the Solicitor General set to expire in 2020, the report recommends that the province adopt a new phone system that allows prisoners to make free calls to both landlines and cellphones, in keeping with other jurisdictions who have put in place such measures to foster community connections that enhance the safe re-entry of prisoners following their release from custody.

View and download it here:
Ontario Jail Telephone Report_JAIL Hotline_Final_October 2019
The JAIL hotline, which takes calls on weekdays from 1:00pm to 4:00pm from people caged at the Ottawa-Carleton Detention Centre (OCDC) seeking support to address human rights issues and information to facilitate their safe re-entry into the community, has been operating since 10 December 2018. In ten months, it has taken 2,677 calls, highlighting the need for short-term reforms to limit the damage of human caging, while working towards greater investments in community-based alternatives to reduce the use of imprisonment. Among the problems in the jail that could be alleviated to some extent by immediate reforms is the degree of isolation OCDC prisoners experience when they’re forcibly separated from their families and supports in the community. Souheil Benslimane, Lead Coordinator of the JAIL hotline, notes: “While human caging, so long as it exists, will always keep people inside and others outside the walls, causing significant pain to themselves and those close to them, putting in place a free phone system would go a long way in bridging this divide, providing means of connection that are essential to getting out and staying out of prison”.

The uOttawa Prison Law Clinic and the Jail Accountability & Information Line have launched the “Habeas Corpus Guide”. Funded by The Law Foundation of Ontario, as well as the University of Ottawa’s Faculty of Law […]

ALGONQUIN TERRITORY (Ottawa) – egregious restrictions imposed due to COVID-19 and dangerously lax health measures at the Ottawa-Carleton Detention Centre (OCDC) are violating the constitutional rights of prisoners as well as international law, according to […]