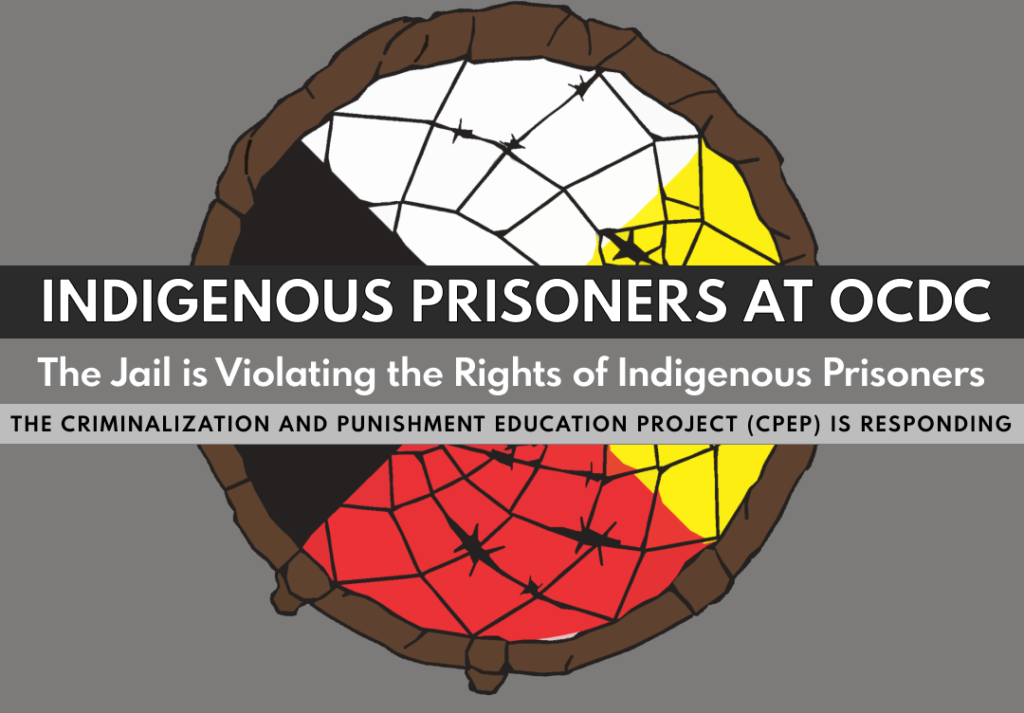 This morning (July 30th), counsel for the Criminalization and Punishment Education Project (CPEP) delivered a legal notice to the Ottawa-Carleton Detention Centre (OCDC) demanding the jail respects its legal responsibilities to accommodate the spiritual and cultural needs of incarcerated Indigenous persons within two weeks (see the legal notice here). The legal notice is endorsed by more than 70 civil society organizations including the Congress of Aboriginal Peoples and 6 prominent advocates for Indigenous justice. It comes only a few days after prisoners ended the second prisoner hunger strike at the provincial jail in as many months.

During this strike, prisoners including Indigenous men and women presented the OCDC administration and the Ontario Ministry of the Solicitor General (MSG) several lists of demands. A list of 9 demands was issued by Indigenous prisoners. Although the jail did not respond to the hunger strikers’ recent demands, OCDC must now redress the human rights violations experienced by Indigenous prisoners within two weeks or face legal action.

Erica Brazeau and Marissa Schoenfelt explain the discriminatory treatment they endure: “We are native women confined to OCDC and we want our culture back. They take away our medicines that we truly believe heal. They took away our cultural ceremonies and for that we are very upset. Not only does OCDC disrespects our culture and our spirituality, they make us do mandatory strip searches every two weeks in front of each other without suspicion. This feels like sexual assault”. Mukwoh Land, an Ojibway and Inuit man imprisoned at OCDC, sees the violations Indigenous persons face at the jail as being part the ongoing colonialism and genocide Indigenous peoples face when dealing with all levels of government within the colonial Canadian state. He asserts: “Similarly to how the federal government claims to be dedicated to reconciliation with Indigenous peoples while simultaneously committing genocide and other forms of state-sanctioned violence and repression against us, OCDC is another Canadian institution that enforces anti-Indigenous state violence and systemic discrimination under the veil of safety. The jail must respect our cultures and spiritualities as they claim in their policies”.

Dr. Pamela Palmater – Mi’kmaq lawyer, Chair of Indigenous Governance, and Professor in the Department of Politics and Public Administration at the Ryerson University – echoes Mr. Land’s understanding and takes this opportunity to reiterate the call to release all Indigenous peoples forcibly confined in colonial sites of human caging. She states: “Canada has been found guilty of historic and ongoing genocide against Indigenous peoples, and the ever-increasing incarceration rates are a core part of genocide. These grave human rights abuses against Indigenous peoples must stop. We should be urgently acting to decarcerate Indigenous peoples – especially women and youth – in all prisons, jails and youth corrections, and providing much-needed social supports like housing and family reunification measures. We must also centre the voices of those who are incarcerated and hold governments to account to ensure their human rights are met while in these institutions”.

Fathima Cader, counsel of CPEP, reminds OCDC that “access to spiritual programming is a right, not a privilege. The Ottawa-Carleton Detention Centre has claimed it has increased spiritual/cultural counselling and programming for people being held at OCDC, but that is not the reality on the ground according to prisoners at the jail. Now, OCDC is simply being asked to comply with the laws and policies it is already supposed to be compliant with. Courts and governmental bodies have long condemned the challenges faced by Indigenous prisoners. Canada’s staggering level of incarceration of Indigenous peoples is a widescale human rights issue, part of Supreme Court of Canada’s own finding that colonization has been devastating for Indigenous communities”.

CPEP believes that the most effective way to alleviate the harm caused by incarceration to Indigenous peoples is to immediately release all Indigenous prisoners from colonial prisons. However, as explains Souheil Benslimane – Lead Coordinator of the Jail Accountability & Information Line, “people that are not locked-up need to engage in solidarity work with all prisoners as long as human cages exist to echo and amplify their calls for justice, recognition, and dignity within the systems that need to be abolished and replaced by healing ways of relating to each other”.

These inforgraphics are available to be shared on social media. The Artwork was done by RJ Jones (Instagram: @earthboy_).

The Criminalization and Punishment Education Project, with the support of the Ontario Human Rights Commission and backed by 60 civil society organizations, is calling upon the Ottawa Carleton Detention Centre and the Ontario Ministry of […]