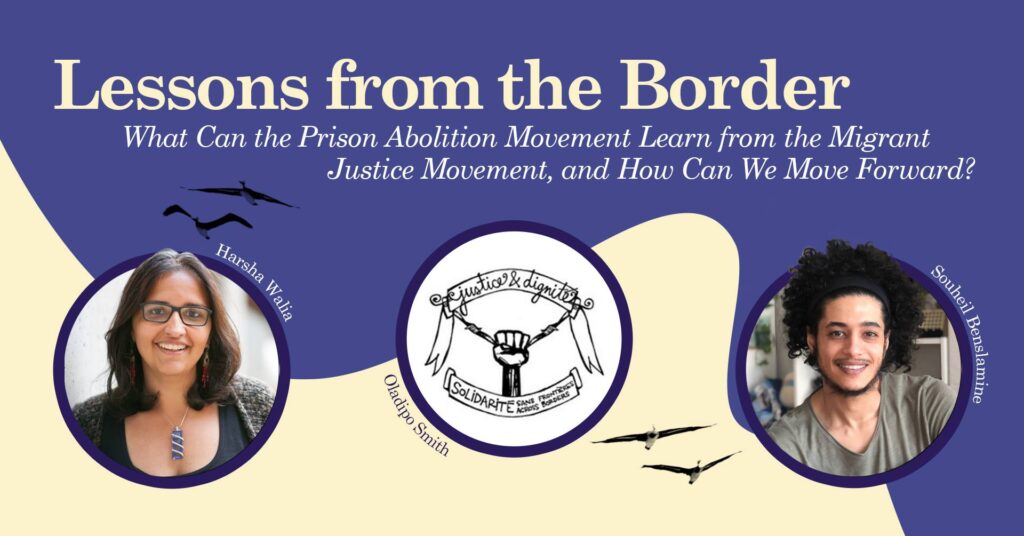 What can the Prison Abolition Movement Learn from the Migrant Justice Movement to Empty Jails and Other Sites of Confinement While Building Caring Communities and De-carceral Futures?

In this panel, we will hear from Harsha Walia (No One Is Illegal, BCCLA), Ladi (Solidarity Across Borders), and Souheil Benslimane (CPEP) about how they conceptualize the border crisis and the caging of and violence against migrants, as well as how they resist the forcible confinement of people who move between violent imaginary borders. Drawing on their insights, we will discuss how we can get people out of provincial, territorial and federal human cages.

Harsha Walia is the author of Border and Rule: Global Migration, Capitalism, and the Rise of Racist Nationalism. She is also the award-winning author of Undoing Border Imperialism, co-author of Never Home: Legislating Discrimination in Canadian Immigration as well as Red Women Rising: Indigenous Women Survivors in Vancouver’s Downtown Eastside. Harsha has organized in grassroots migrant justice, anti capitalist, feminist, abolitionist, and anti-imperialist movements for two decades. Trained in the law, she is the past Project Coordinator of the Downtown Eastside Women’s Centre and current Executive Director of the BC Civil Liberties Association.

Oladipo Smith:
I am called “Ladi” and currently an undocumented immigrant in Canada. I arrived in Canada in November 2019 as a refugee claimant but was deemed inadmissible due to my criminal charge in the United States and now face a removal order from Canada. I am a Nigerian, I moved to America in 1996 on a basketball scholarship but got associated with some wrong group of friends in my younger days. In 1998, I was charged with Conspiracy to distribute a controlled substance (heroin). After two days of trial, I was found guilty of the charge and sentenced to ten years and one month in prison as a first-time offender. I served nine years in prison and one year of probation.
After my sentence, I was released to society in America and still was an illegal immigrant in the States. I was not only illegal but would not be able to regularize my status because of my criminal history. For thirteen years after my release from prison, I lived in the United States Illegally. To sustain myself, I created a company to transportation and provide medical supplies and equipment for low-income people. Starting my own business not only helped provide an income for me but also allowed me to help ex-offenders that are getting out of prison by providing a job. An employment that not only provides some form of income but a needed motivation and structure needed to adjust back into society.
New immigrants like ex-prisoners have similar challenges, the ability to adapt to a new culture, language, and way of life in the part of immigrants; The same can be said with formerly incarcerated people after a long prison sentence have to readapt to society, the ability to reinvent themselves to a changing world.
Change on every/any level is very difficult, particularly if you have no support. I have experienced both part of trying to reinvent myself as an immigrant coming to a new culture/country and also as an ex-prisoner trying to resuscitate my life after spending ten years of my life in prison.

Souheil Benslimane is an illegalized and criminalized migrant who is currently living on occupied, unceded, and unsurredered Algonquin Anishinaabe territory where he awaits an imminent deportation to Morocco. Souheil became involved in abolitionist as well as prisoner and migrant justice organizing as a member of the Criminalization and Punishment Education Project (CPEP), a member of the Ottawa Sanctuary Network (OSN), and the Coordinator of the Jail Accountability and Information Line (JAIL) hotline. Through the mutual aid project he coordinates, Souheil organized with incarcerated comrades several political and legal public campaigns meant to hold institutions of human caging in so-called Canada accountable for the harm it causes to criminalized peoples and their communities and to alleviate some of the harm caused by incarceration. His first peer-reviewed article, co-authored with David Moffette, PhD (Assistant Professor, Criminology, University of Ottawa), is entitled “The Double Punishment of Criminal Inadmissibility for Immigrants” appeared in Volume 28 of the Journal of Prisoners on Prisons in the summer of 2019. Souheil also co-authored “The Jail Accountability and Information Line: Early Reflections on Praxis” which was published in Volume 33 of the Journal of Law and Social Policy and wrote a forthcoming chapter for the Routledge International Handbook of Penal Abolitionism entitled “Please Shackle Me and Throw Away the Key: How a Shift in Understanding Alienation, Oppression, and Determinism Led a Docile Body to Adopt an Abolitionist Stance.”

JOIN THE PEACEFUL MARCH IN OTTAWA / ON ALGONQUIN TERRITORY AS PART OF THE MULTI-CITY DAY OF ACTION AGAINST CANADA’S DETENTION OF MIGRANTS OCTOBER 3, 2019 DEMAND PRISON PROFITEERS BUILD COMMUNITIES, NOT CAGES —– MARCH […]

Audio: Members of CPEP and the JAIL Hotline sit down with David Moscrop

Download or listen to the interview here: https://podcasts.apple.com/us/podcast/do-we-need-prisons/id1441042667?i=1000451895058 “Do we need prisons?” is the question posed by the host of Open to Debate, David Moscrop. CPEP members Justin Piché and Souheil Benslimane sit down with […]